‘Las Estrellas del Camino’: The most extensive art exhibition in the world grows and reaches Portugal 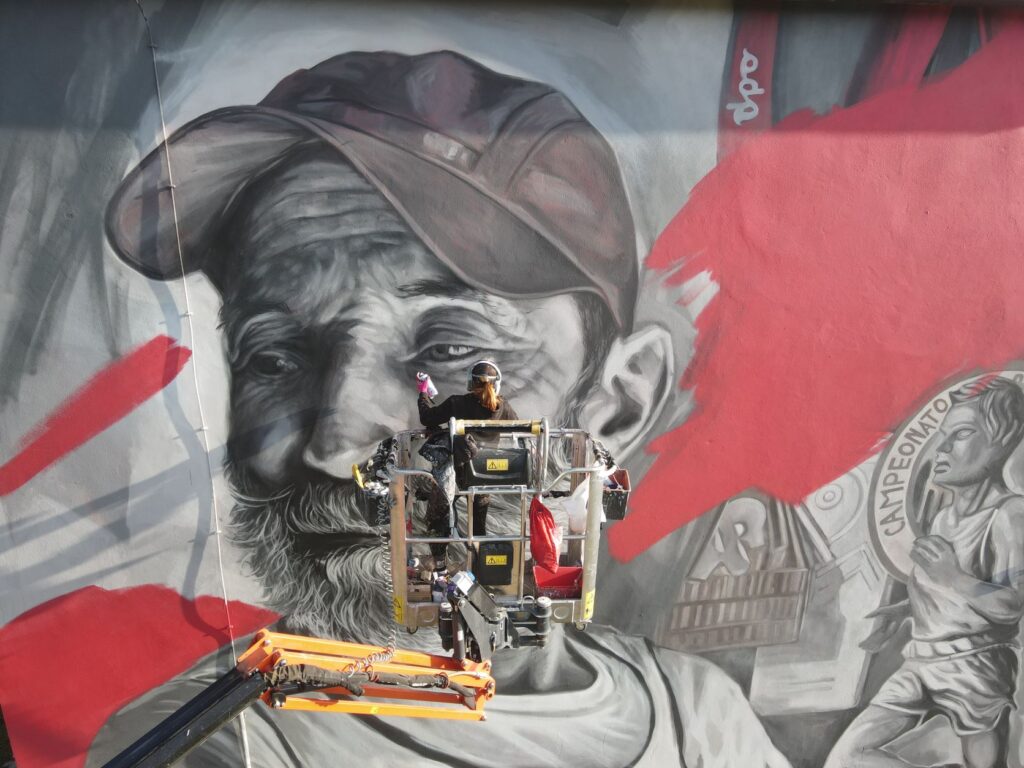 After the success of the 2021 edition, we expanded the artistic initiative Las Estrellas del Camino with the aim of continuing to pay tribute to all those people who keep the spirit of the Camino de Santiago alive. This year, it 230 km longer and enters Portugal through the Camino Portugues, with dialogue as a common thread.

The Galician artist Lula Goce and the Portuguese Daniel Eime, will portray nine protagonists in murals spread over as many stages of the Camino Portugues, to symbolize the dialogue and twinning between both peoples. The murals showing Joaquin Sá, a 74-year-old athlete and Enrique Ocampo, representing the Ocampo family dedicated to the construction and repair of bells are already finished and can be seen in Rubiaes and Caldas de Reis.

After the great reception of its “Las Estrellas del Camino” initiative in 2021, Estrella Galicia returns to pay tribute to those people who keep the spirit of the Camino de Santiago alive in a Xacobeo that, exceptionally, will last two years. It does so by expanding the most extensive art exhibition in the world, which in this new gallery covers the Camino Portugues and uses dialogue as a common thread.

Our brand thus reinforces its commitment to this unique experience and its authentic protagonists: the thousands of pilgrims who enjoy an unforgettable journey every year and who, together, weave an infinite network of stories, meetings and exchanges.

A year ago, Estrella Galicia inaugurated the most extensive exhibition in the world, along the last seven stages of the French Way, totaling 140 kilometers. Now, this artistic exhibition is extended by 230 km, covering nine stages of the Camino Portugues, between Porto and Santiago de Compostela. Each of them will feature an outdoor mural painted by Lula Goce and Daniel Eime, who interact by establishing an artistic conversation.

The protagonists of these murals, which can be seen by pilgrims, are nine people with nine stories of resistance linked to the Camino, tradition, and the land, who have been able to face all the difficulties that have been presented to them. Among them, a 74-year-old athlete who has done the Camino back and forth on multiple occasions, an award-winning pianist and cultural manager who has entered the ranking of the Top 100 Women Leaders in Spain, or the bell ringer who has shaped the bells of the Cathedral of Santiago following the family tradition since 1630.

“We want to continue paying our most sincere tribute to all the people who live on the Camino, because thanks to them, it has become a unique and unrepeatable experience. And what better way to do that than by reflecting their stories in works of art made by two exceptional local artists. It is our way of thanking them for everything they do for our land and for keeping alive the traditions that unite the peoples of Galicia and Portugal” says Santiago Miguélez, Marketing Director of Estrella Galicia.

The history of Galicia and Portugal is that of two close peoples, who have maintained an indissoluble link over the centuries, with the Camino as a fundamental connector. Dialogue is an essential part of this trip, as a link between people from different countries and cultures, who share a multitude of experiences on their journey to Santiago de Compostela.

Therefore, dialogue is the common thread of this new exhibition, in which Lula Goce and Daniel Eime will alternate their works along the itinerary, establishing a conversation through the murals and reinforcing the idea of exchange, so present on the Camino.

“The Camino de Santiago cannot be understood without the people who have made it the experience that it is, and that has endured over the centuries. For this reason, we wanted to make dialogue one of the central pillars of the exhibition, promoting this idea of collaborative experience and twinning between peoples, cultures and people”, explains Goretti Castro, Manager of Culture, Gastronomy and Origin at Estrella Galicia.

Curated by Estrella Galicia, “Las Estrellas del Camino” is the most extensive artistic exhibition in the world. After opening last year with murals, the work of the urban artist Mon Devane, in seven stages of the French Way, this year it is extended to nine stops in the Portuguese one. Specifically, the murals will be painted in very visible places, such as façades or bridges in Matosinhos (Porto), Barcelos, Ponte de Lima, Rubiaes, Tui, O Porriño, Pontevedra, Caldas de Reis and Padrón.

Two of the murals are already finished; The mural of Joaquin Sá, a 74-year-old athlete, in Rubiaes, painted by Lula Goce, and that of Enrique Ocampo, representing the Ocampo family that has been dedicated since 1630 to the construction and repair of bells, including that of the Cathedral of Santiago de Compostela, in Caldas de Rei, also portrayed by Lula Goce.

A milestone will be placed Very close to each mural, with detailed information of each person portrayed. These new milestones will be part of the new artistic journey of the road

Each mural will depict a local protagonist with a personal story that reflects their link to the land and the Camino, as well as their fighting spirit. Artists, artisans, athletes… Each and every one of them embodies the spirit of the Camino, with values such as overcoming adversity, perseverance and twinning.