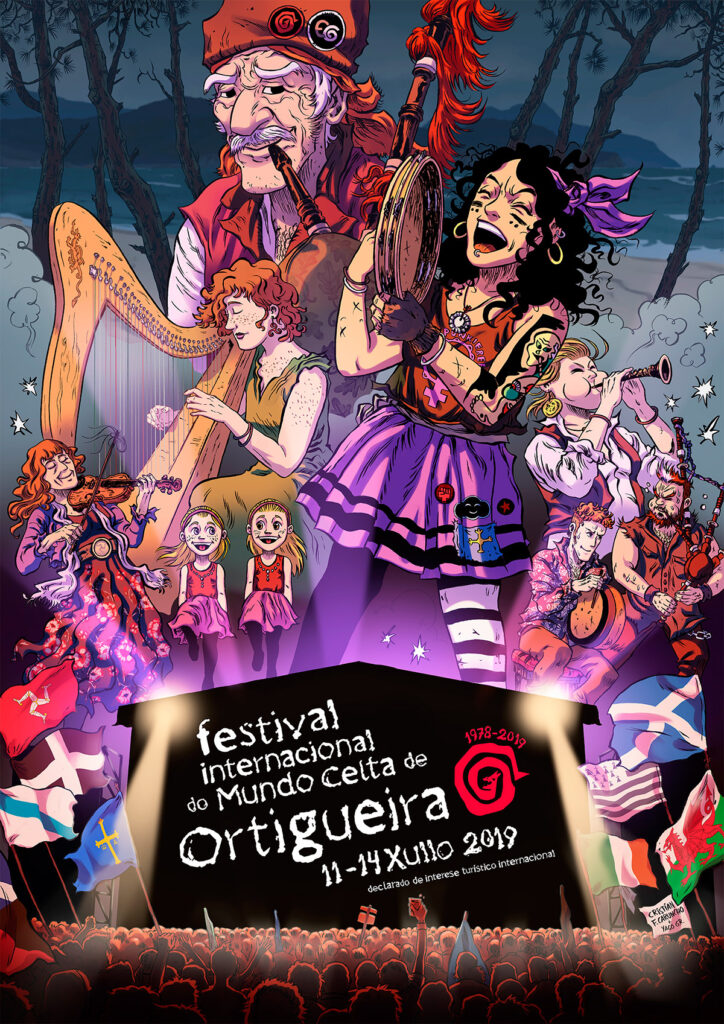 Moving Hearts, Shooglenifty, Gwendal and Flook head the line-up of the Festival Internacional do Mundo Celtain Ortigueira, and will be performing on the Estrella Galicia stage between 11 and 14 July.

The Ortigueira council presented the new edition of the Festival Internacional do Mundo Celtain Ortigueira in the Estrella Galiciabar in A Coruña. During the event, the full 2019 programmewas announced as well as all the latest newsabout the festival, such as the making of a video and musicespecially for the festival under the slogan “Oito Nacións Unha Cultura” (Eight nations, one culture) or support for gender equality in the new talent contest.

During the presentation, the mayor highlighted the design and originality of the poster, work of an illustrator from Ortigueira, the idea surrounding it and the slogan, which all highlight a cultural union of 8 nations and the Europeanization and internationalisation that this entails: “Ortigueira will become the worldcapital of Celtic culture from11 to 14 de July”. Finally, he highlighted the fundamental values for this year: the look towards Europe, the support of gender equalityat the festival, and the promotion and use of its own resources.

Both the line up and the audio-visual pieces, also created by professionals from Ortigueira, are based on the common cultural links, especially music, that join the 8 Celtic nations under the slogan #OitoNacionsUnhaCultura #OchoNacionesUnaCultura #EightNationsOneCulture.

The 8 nations, Galicia, Asturias, Scotland, Ireland, Brittany, Wales, Cornwall and the Isle of Man, appear on the poster and ad for this edition, answering the call of Breogán, representing Galicia,to gather in Ortigueira. This year, all of them will be represented at the festival, turning this area in A Coruña into the world capital of Celtic music and culture.

He finally presented 3 actions that the council would be supporting at the festival: equality, a look towards Europe, and a use of their own resources.

Alberto Balboa, coordinator of the festivalfocused on the artistic and musical aspects. He spoke of the history of the festival and the great names that have been part of the festival during these four decades, and the changes that have been introduced in recent editions, such as extending the cultural programme and diversification of areas. He highlighted the philosophy behind the event, which is free and open to all the generations.

He also highlighted the “fusion of classic and new bands” on the programme, mentioning the performance of Moving Hearts, which will be a special concert as they do not play many festivals. He presented the 2019 line-up, and the world famous bands that will be heading the Ortigueirafestival that “becomes a window for Celtic music during those days, and all year round”.  He announced much-awaited concerts like those by Gwendal (Brittany) on Thursday, Moving Hearts (Ireland) on Friday, Shooglenifty (Ireland) and Flook (Scotland) on Saturday. And, of course, on Friday the Escola de Gaitas de Ortigueira(Ortigueira school of bagpipies), who founded the festival, alongside the Galician bands Anxo Lorenzo Band (Friday), Tanxugueiras, O Fiadeiro and Leilía (Sunday). He also spoke about the theatre programme, the indoor version of the festival, held throughout the year.

In addition there will be “other musical performances, such as those from new talents” Beltaine (Poland), winners of the last edition of the Runas project, as well as this year’s 3 finalists, Yuki Kojima Band, (Japan), Túa from Murcia and the Galician Dequenvessendo. This reflects the importance of Ortigueira and of Celtic music all over the world.”

The presence of the festival spreads to other parts of the area,with concerts in the town square for the very first time, in addition to those already held in the theatre and church. And, as always, numerous bagpipe processions in the streets, exhibitions, workshops, and parallel activities, including a parade of Celtic nations on Sunday 14th. Everyone is invited to go to Ortigueira and enjoy Celtic music, a public festival with private backing and associated to Galician culture.