Dani Pedrosa, “It would be great to have a second half of the season as good as in 2012” 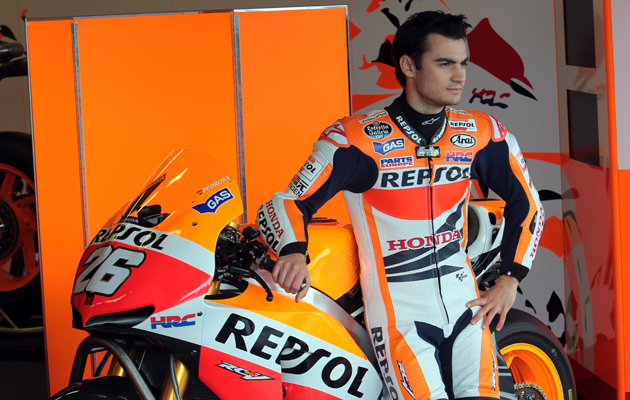 In second place in the Moto GP Championship, sixteen points behind the surprising leader Marc Marquez, the rider also sponsored by Estrella Galicia 0,0, Dani Pedrosa, managed a difficult situation in the US GP by adding 11 valuable points, which keep him in the running for Moto GP’s 2013 top prize.  A fall in the GP training sessions in Germany cut short the steadiness of the Repsol Team rider, who has been leading throughout most of the Championship.

How do you feel after a race like the Laguna Seca one?

To be honest, I’m really happy. Whenever you make such a great effort, and with the risk that there was in the US GP, to get a good result is truly satisfying.

You’ve reached the half-way point of the season 16 points off the lead. How would you sum up these last 8 races?

On the whole I think there has been a good standard. We’ve ridden well, although not all the races have been perfect, and we’ve lost a lot of points in the last 3 races.  Perhaps our weakness lies in a lack of consistency, but despite this we are still in the running for first place. With regards to the second half, we have to improve our consistency in order to gain positions in this fight for the world title.

How did you see yourself on the bike? What aspects do you think you need to improve in this second half?

In all the races we’ve had some differences compared to the competition. There have been several factors that have had an effect on the bike’s performance such as heat, cold and so on, and it’s been very difficult to compensate for that.  Real equality hasn’t been visible in many races, Honda or Yamaha have always had a slight advantage. That’s why it’s been difficult as a rider to make a difference in that aspect.  However, we have managed to be in second place. We can say that we have had good races and that we have focused on not making mistakes when we weren’t in a position to fight to win.

How does your fall in Germany affect your season?

We missed an opportunity to score. We didn’t do it in Sachsenring and we lost a few more points in Laguna Seca through injury. Basically, let’s hope that it’s all in the past and that this second half we can have good races until the end of the championship.

With riders such as Marquez and Lorenzo, can the mistakes be made up for?

Luckily for me they have also made mistakes. Perhaps Marquez is the one who has committed fewer mistakes and that’s why he is in the lead. So, it’s easy to see the tendency in this World Championship: whoever makes the fewest mistakes- which is the most difficult thing to avoid- is the one who wins most points. But should you commit a mistake, if someone else also does, you can always recover.  In fact, last year we did that, although it’s not that straightforward.

What has surprised you most about Marc’s adaptation?

On the whole, I’ve been surprised by how quickly he learns things. He doesn’t need a lot of time to learn.

How are you facing the second half of the year?

With excitement and strength. Determined to have a good second half and to mark the territory to get good scores in each race.

What GP do you have highlighted? Which circuit do you most want to race at?

I don’t have any particular one highlighted.  I try to take it a race at a time. Right now, I’m only thinking about Indianapolis, which is the first race after the break.

In order to win, does one have to suffer or have fun?

(Laughs) Both! Mainly, you have to have fun, you have to like what you do. But, during a race, there are moments in which you suffer.

Will we see the same Dani as in the second half of the 2012 season?

I hope so. I now have a few days to recover and pick up some energy, which is the priority.  We hope to start the second half of the season in the best possible physical condition, as it kicks off with three races in a row.  It’s important to be in good physical condition to be able to do three weeks at your best.

Dani Pedrosa will be the 2013 World Champion if….

I manage to perform well at all the races and not make any mistakes. The most important thing is to continue at a high level and maintain it until the end of the year. That can make you win the title.

Your summer plans: Physiotherapy and switching off?

Yes, I’ll take advantage of the time to recover and see how the injury progresses. We have a recovery plan which will be adapted as it improves. It will depend on how things go along.  At the same time, we will try to switch off, as this second round is going to be very intense, so it’s time to have some fun now.

Of all the countries that you race in, besides Spain, where are the most passionate fans?

In the US motorbike racing is lived intensely. Over there they greet all the riders in the same way, and that’s great. But the passion that there is in Europe for the bikes is incomparable.

What’s your advice for watching the races, on the track or on TV?

The circuit! Only from there can you understand the magnitude of the speed and the intensity that there is in this sport.  Watching the races on TV, you can watch and say “Why doesn’t he overtake him?” At the circuit, you can watch and you can appreciate how things really are, how fast the bikes go, how difficult it is physically and the short distances that there are between the riders.  If you see it in person, you can really understand the reality of this sport.

Do you identify yourself with any sportsperson?

Each sportsperson is different, but it’s true that there are similarities. Although I don’t identify with anyone, I highly respect Andres Iniesta. He has sporting values that I like: discipline, sincerity, manners and respect. He has a strong character and he always moves within the rules of the game. Those are values that I like to see in a sportsperson.

What do you like to do to switch off?

I suppose that, like everyone, I like to have fun and have a good time with my friends and family. Riding a motorbike, or go karting, windsurfing, or something crazy is good, but the idea is to completely switch off. These days are good for resting, eating well, and just enjoying yourself. Nothing out of the ordinary, simply live the moment.