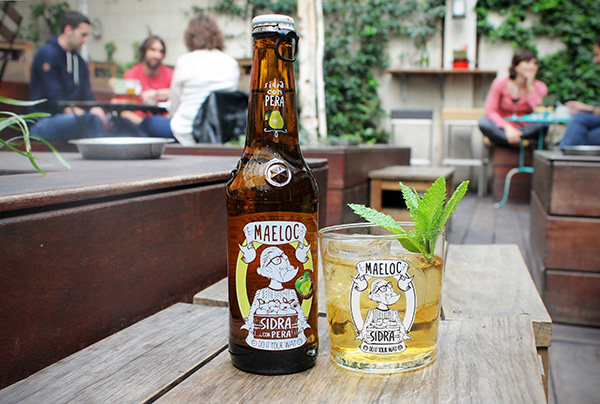 Natural, healthy and delicious at any moment, cider is much more than a drink made from apples. Our flavoured Maeloc are the proof of the pudding, alone drank chilled or with a thousand and one possible combinations in cocktails. Not only that, as behind our ciders there is a

project to recover the cider tradition in Galicia, boosting research into autochthonous apple varieties in Galicia and collaborating with local producers, who supply us with the apples with which Maeloc is made.

Who was Maeloc? Continue reading and allow José Luis Olmedo, R&D project manager at HR Incorp and an expert in the matter(,) to fill you in, and in the process leave you wanting a nicely chilled Maeloc.

Yes, it is. Both terms refer to cider that has been made following traditional processes, and that has no added sugar or gas. Its main characteristic is its cloudiness.

According to the Technical Health Regulations for cider, dry cider is that which has less than 30g of sugar per litre of cider. It is the British type of cider.

No, it doesn’t. Apples are gluten-free thus cider is a suitable drink for celiacs.

Yes, and very rounded from a dietary point of view. It contains carbohydrates, minerals and vitamins, and no fat.

They are called borra and they are a combination of matter, particularly organic substances and salt, that naturally drops to the bottom of the bottles when the apple juice fermentation takes place and during the preservation of the cider.

In any case, they are not a product defect and are considered to be a sign of a quality cider.

They are exactly the same as they are effectively the same cider. The only difference is the carbon dioxide, as draft cider has slightly less than bottled cider.

There are several factors involved, but assuming that the cider is the same in all points of sale, its quality is mainly affected by: the rotation of the cider, the cleanliness of the facilities (carried out by our technical assistance service) and how the cider is pulled.

The one you like most. It is a very Spanish custom to always choose the best of anything. Nowadays it is very rare to find an off spec product on the cider market. Quality controls are highly developed and offer great homogeneity in product and consumer safety.

However, there are always some criteria which are synonymous with a high quality cider that can be taken into account, for example, it is important that the cider has been made with fresh apples, just like the ones used by Custom Drinks.

The alcohol found in cider is not added, it is the result of the alcoholic fermentation during the manufacturing process. This natural process is caused by the yeast in apples which transforms juice sugars into alcohol and carbon dioxide.

There is no accounting for taste, but to perfectly appreciate all the nuances of a natural cider it has to be poured, traditionally (lifting the bottle up high) or with more modern methods such as electric pourers; both have the same function: to air unpleasant volatile organic matter and to obtain bubbles when the liquid hits the sides of the glass.

Leaving to one side the fact that the ideal temperature is a personal choice, we recommend our ciders be served between 6 and 8ºC. One thing to note is if a cider is too cold it numbs the taste buds preventing the complete appreciation of the cider and if it is excessively hot its foam has less consistency. At room temperature flavours can be detected better.

In the case of ciders containing fruit juice, the fruit gives the cider its colour because that’s the aim. The colour of other types of ciders will mainly depend on the variety of the apples used to make them, the most common colours range from yellow to gold.

It depends on the consumer’s tastes and the type of cider. For example, ice can be added to dry ciders and those with strawberry, pear or blackberry making it a perfect refreshing drink.

Rinse and drain the glass, and without drying it place it at a sufficient distance for the cider to gently hit the bottom and fill three-quarters of the glass. Next, and with the glass in a vertical position, open the tap half way so that a fine layer of foam falls on top. In the case of cider, the consistency of the foam is not as important as the bubbles that float in the liquid. This aspect is called the aguante (hold).

To pour from a bottle, the same process must be followed, judging the distance between the bottle and the glass, as well as the angle of the glass.

This process prevents the development of microorganisms in the cider, but it does not change its composition, colour, aroma, or taste.

Cider does not have a best before date just like other drinks such as wine.

Cider has no vintage. At Customdrinks ciders are made with a strict control of all the processes that the apples must undergo, in order to make quality ciders as the awards obtained in at the International Cider Challenge last year corroborate, where a number of our ciders obtained the highest marks in the contest.

Because in Galicia cider apples are conventionally and organically grown, and Custom Drinks accommodates both types in the production of our range of ciders.

He was a bishop of Britonia in the 6th century, a settlement founded by the Bretons in Galicia. He arrived from Celtic Europe possibly to become a religious and political leader, and brought with him the tradition of cider production.

Maeloc is our particular homage to all those who have made and are making a journey.

It bears fruit in the second year after being planted, but it isn’t until the fifth year that production settles.

One of the requirements that producers must meet is that the apples be grown in Galicia, and the other is that they must be cider apples not dessert apples.

Galicia produces around 85,000 tonnes of apples, followed by Asturias with half that amount.